Operational training of sonar crew requires realistic targets for the sonar sensor. Real targets are submarines of different sizes, mines and torpedoes. Use of real targets is a very costly operation. This creates a need for artificial targets that can simulate real targets in a realistic manner.

This system consists of a floating buoy communicating over radio with a ship borne control station.

The following operational requirements were determined

Hafmynd - Island was selected as the instrument platform. The system is a highly versatile multipurpose, man portable AUV that has a modular construction that allows for user changeable modules. The system can carry an array of sensors including cameras, side scan sonar, IHO precision bathymetric sonar, various environmental sensors, and payload modules that can be fitted with custom instrumentation. 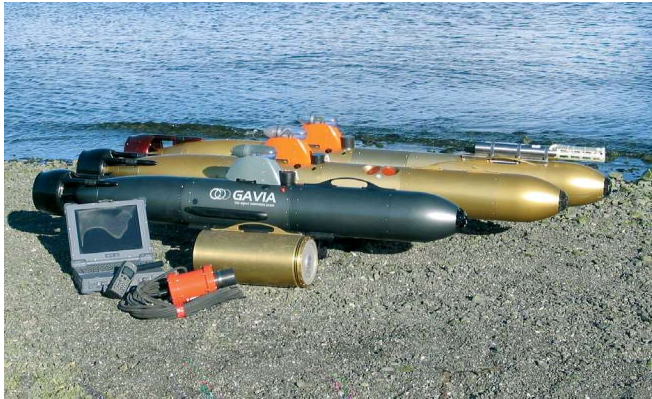 One of the main advantages of the system is that it can easily be reconfigured by changing payload modules, thus can a system be used as a sonar training target one day, and for mine field mapping with side scan sonar the next.

The setup of the sailing mission for the AUV and the corresponding setting and activation of the functionality in the mounted payload module are all done in a graphical user interface on the control PC. So is read-back of results and data from the mission. An example of read-back is shown in the picture below. The plot shows the positions of the system after sailing into a harbour and back. 2 • Distance travelled during initial lawnmower pattern and transit in and out of harbour: 8.3 km • Navigation precision approximately 4m, based on difference in GPS positioning and INS positioning after the completion of the initial lawnmower pattern route and berthing when vehicle surfaced. 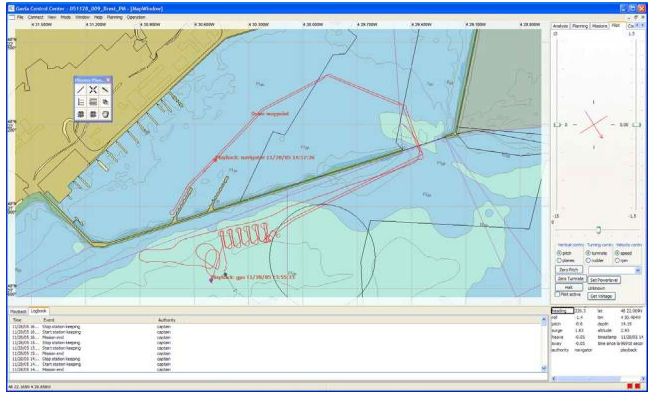 Main specification for the system Platform

Weight with selected modules approx 65 kg, length 2.70 m. Speed up to 6 knots. Endurance of mission approx 2 hours. Mission planned with GUI on Control PC. High speed communication between Control PC and the system through WLAN, only when the system is in surface and withing WLAN range. Read back of all logged data from the different sensors including the STM after mission. 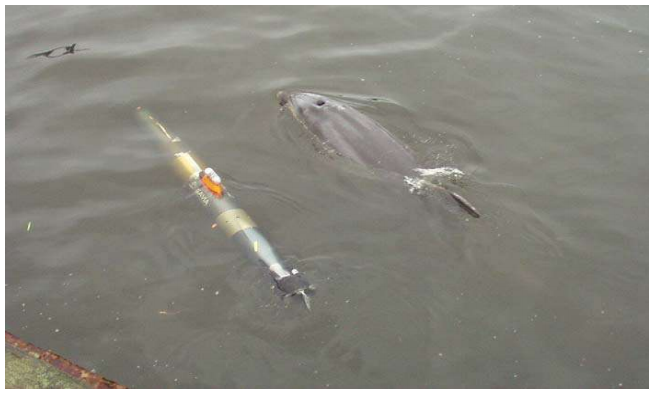 Based on their good experience of system, the customer selected the TECAL-13 electronics for fitting into the system payload module volume and to implement the necessary changes to overcome the additional challenges going from a stationary to a moving system.

The main challenges were the following.

• Finding transducer with sufficient low-frequency transmit-sensitivity to fit within the limited size of the system (20 cm diameter).

• Optimizing the transmitter to the transducers for sufficient high output within a power budget limited by the battery capacity.

• Construction of transducer-assembly to cover the relevant frequency range of sonar sensors in the actual navy.

The STM consist of a flooded transducer compartment, an electronic compartment and a hydrophone that is towed 10 m behind the AUV platform

Active sonar sensors can be divided into the following frequency groups:

• Very low frequency sonars in the frequency range of 1 to 3 kHz.

• Low frequency sonars in the range of 5 to 12 kHz

• Medium frequency sonars in the range of 12 to 24 kHz

• Mine sonars in the higher frequency range

The size of the system prevents adaptation of efficient transducers for the very low frequency band. In the frequency range of 5 kHz to 48 kHz, transducers and matching network can be optimized for three different sonar bands that will normally match the active sonar sensors found in a navy. For "Passive noise" with lower output, the frequency range is from 3 kHz to 20 kHz.

The directivity function is shaped in the following way:

• Reduced power upward towards the surface and downwards against the bottom for preventing energy to be reflected back to the hydrophone.

The resulting directivity will for the user look similar to the reflection properties of a submarine with lobes in the polar diagram and a max reflection in the broadside aspect. 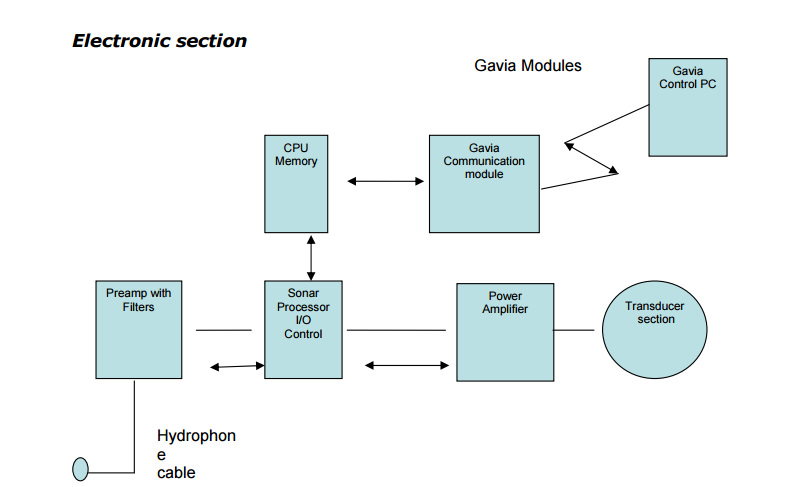 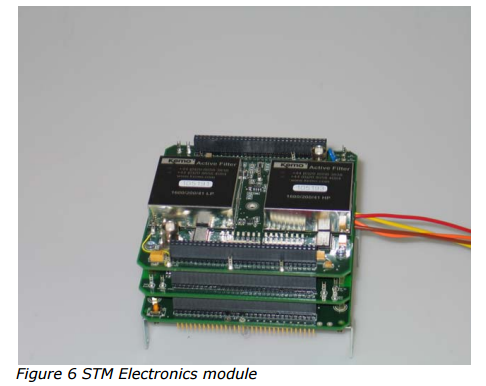 The resulting product is the well proven technology of the SONCAT system fitted into the small Platform. The form-factor of the hardware is different, but the schematics is the same except for the power amplifier which has reduced power.

The firmware remains the same, and is in fact so equal that upgrades in the future will be same code for both the products. We will here highlight some of the operational possibility:

Echo repeat mode: The Sonar Training Target will for the Sonar sensor look as a submarine travelling with the speed of the platform and with a max target Strength of 20 dB which is a typical medium size submarine.

Store repeat: When a sonar ping is detected by the STT, a pre-recorded echo is repeated. This mode gives the facility of full output power with no "sing around" problems, and a Target Strength of up to 40 dB can be achieved.

Target highlights : The echo can be manipulated the same way as a target with finite dimensions will do. Different targets can be defined and stored in a file with different aspect angle. When the platform is programmed to turn into a new leg of its sailing mission, an echo structure representing a different aspect angle of the target can be commanded to the STM.

"Passive mode":  The STM can output pre-stored pulses or pre-stored noise signals continuously or with intervals, and with varying level - either increasing or decreasing. This can be used for identifying a target as the system among other 7 8 targets, for simulating a torpedo attack or for warning surface ships when surfacing.

UWT commands: The Under Water Telephone can be used for commanding the STT . The advantage of this is that an underwater telephone has far more power than a modem, and no restriction to sonar frequencies is posed by modem frequencies. The UWT commands will be used for escape commands and change of modes only, as the STT shall normally carry out planned mission without interruptions from ships. The commands are relayed from the Sonar Transponder Module to the mission controller in the platform.

Operation of the Sonar Training Target.

This phase also includes balancing of the platform for the actual salinity in the operation area. The sailing plan and the use of the different sensors are commanded from the PC to the platform.

Deploying is done by two persons from a dinghy-boat, and the system is left for carrying out the pre-programmed mission. A GPS fix of the position is made before diving, and the navigation is later done by means of Doppler log and inertia navigation system. Salinity is monitored by means of a sound velocity meter, and action is taken if the set limit is exceeded.

During the exercise, the echoes from the STT will look like the echoes from a real submarine, and the sonar target tracker will find that range, bearing and speed of the STT is consistent with a real target. If a combined exercise is performed by several sonar ships, the STT will be able to respond to several sonars with different frequencies as long as the pulses are separated in time.

When the mission is finished, either by time or by abort command by the UWT, the system will surface, update the position by means of GPS and report position. The system can then be recovered by two persons in a dinghy. The log files can then be retrieved