Sonar tester is a portable system that is operated from the pier, a small motor boat or the vessel itself. It comprises of a transceiver package that is connected by cable to a portable control station. The transceiver package consists typically of a hydrophone for receiving sonar signals, and various transducers for transmitting sound.

The Sonar tesster’ purpose is to contribute to an accurate test and calibration of the vessel’s sonar systems. This system has been using in Norwegian Navy and some other Navy Departments in the world.

It receive and retransmit active sonar signals. The signals will be modified with programmable delay, Doppler and amplitude. With separation of hydrophone and transducer, the transmitted signal can be sent nearly simultaneously while receiving.

The programmable delay is accurate to within 1 m for calibration of sonar range scale. It can also transmit noise files like torpedo noise. The unit is commanded and report to a PC over Ethernet cable.

In Echo repeat mode, the sonar-ping is received, stored and retransmitted after set delay. The response is modified with target high-lights, Doppler and level.

When a sonar ping is detected by Sonar tester, a pre-recorded echo is transmitted.

The echo can be manipulated the same way as a target with finite dimensions will do. Different targets can be defined and stored in a file with different aspect angle.

Can output pre-stored pulses or pre-stored noise signals continuously or with intervals. The level can be varied with time - either increasing or decreasing. This can be used for testing “passive sonars” or testing “torpedo mode”. 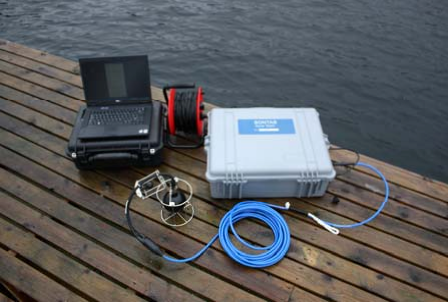