Shimadzu’s EDX-8100 is an energy dispersive X-ray fluorescence spectrometer with high sensitivity for light elements and can be configured with an optional helium purge unit. The helium purge unit enables high-sensitivity analysis of light elements in samples that cannot be depressurized to a vacuum state such as solutions and samples that generate gas. As one effect, detection of fluorine (F) in liquid samples is possible with the EDX-8100. The detection limits of the elements F to K in liquid samples in a He atmosphere and differences depending on the film used to hold the samples were evaluated.

The samples are shown in Table 1. Pure water was used to calculate the background intensity.

Approximately 5 mL of each sample was introduced directly into a film-covered sample container. The three films shown in Table 2 were used.

Fig. 1 shows the measured spectra in air and a He atmosphere when using the polypropylene film. Table 3 shows the detection limits calculated from the intensity and measurement conditions (current and integration time). The He atmosphere enabled detection of F and Na, and improved detection of Mg by 40 times, Al and Si by 8 times, and P and S by approximately 2 times. 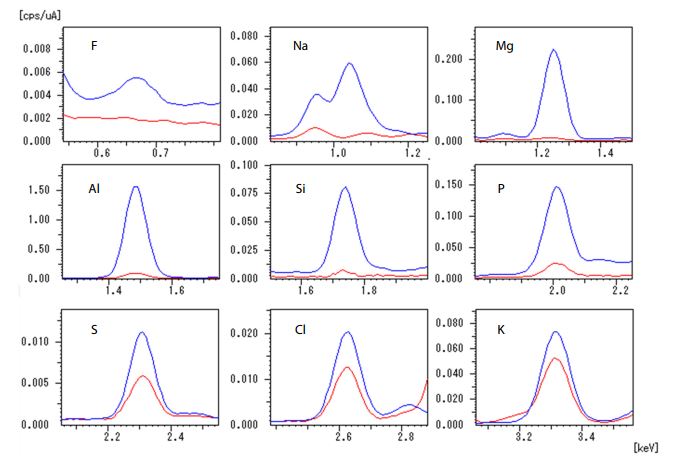 (2) Differences Depending on Film

Three types of films were used in measurements in a He atmosphere. Fig. 2 (next page) shows the spectra, and Table 4 shows the detection limits. Prolene (Chemplex Inc.) with a thickness of 4 μm displayed the highest sensitivity, and the influence of the film thickness and composition on absorption increased with lighter elements.

Measurements of liquid samples by EDX are possible regardless of conditions such as concentration,    organic or inorganic material, suspension, and viscosity. This technique is not limited to solutions, but is also effective with samples such as the following, which are difficult or impossible to depressurize to a vacuum.

This technique is effective for quickly determining the presence and content of light elements in the abovementioned materials.